What should be the objectives when performing geotechnical exploration for slope analysis in residual materials? What minimum information should be obtained from field exploration? What lab tests should be performed to obtain geomechanical design parameters? What criteria should be applied? These are some of the questions that may arise in projects involving slope stability in residual materials. So let's try to provide some answers...

Objectives of the geotechnical investigation

When developing projects involving slope stability in residual soils, the first thing that comes to mind is that the geotechnical investigation of this type of materials using traditional methods (i.e., based on the tools and available equipment in most geotechnical companies), is somewhat complicated, mainly for two reasons: A) because these materials are usually partially saturated; and B) because the geology of the slope is usually very complex.

What should be, then, the main objectives of the geotechnical investigation in these cases? Basically, they should be oriented to obtain information on:

It is important to consider that, given the complexity of the geotechnical behavior of residual soils (particularly in slopes), these objectives should never be lost sight of during the investigation, since they include the basic information necessary for the adequate characterization and understanding of the problem, as well as for the estimation of the geomechanical parameters required in any model of the slope that is developed to analyze its behavior. 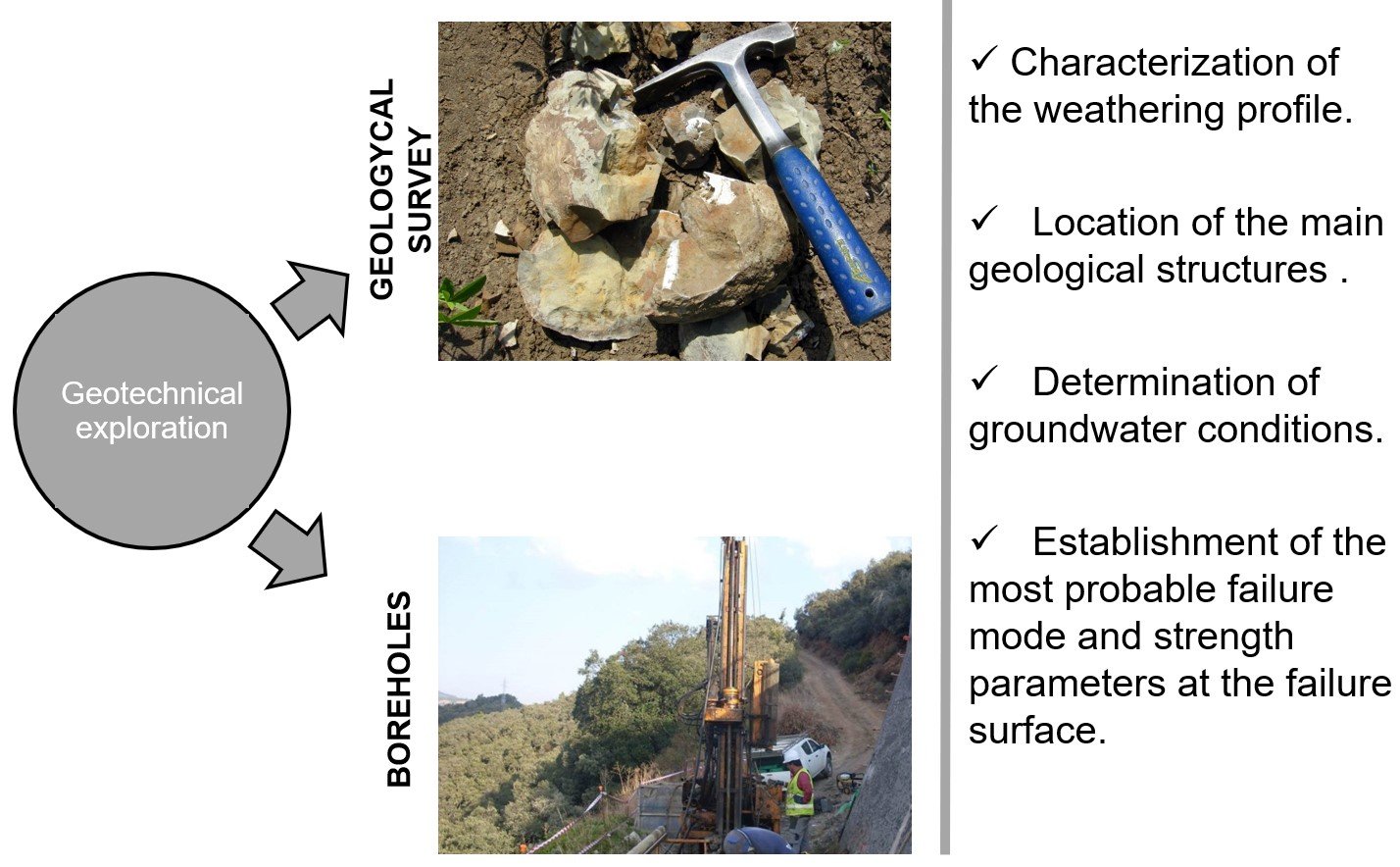 Some authors recommend the use of geophysical methods (such as seismic refraction or electrical resistivity, for instance), from which the thickness of residual soils could be evaluated in an approximate way. However, it should be noted that Geophysics should be applied with caution in these cases, due to the limitations related to interpretation of the obtained data, which is significantly more difficult for sloping grounds.

Therefore, it is more convenient to perform a detailed geological exploration, which allows to clearly identify the different weathering horizons. Such exploration should be complemented with geotechnical drilling, of NX diameter or larger (so that the RQD - Rock Quality Designation - can be determined when the rock is detected). In addition, it is advisable to carry out the SPT (Standard Penetration Test), as far as possible in a dry condition, in order to have an idea of the strength of materials in the weathering profile, as well as to detect the presence of water in the subsoil (Amundaray, 1985).

A complicated point is always to determine the number of boreholes to be drilled. As a general criterion, the number of drillings will depend on the degree of heterogeneity of the slope, and in all cases they must reach the fresh rock. This implies that the drillings must be executed after the geological survey, since the location of the boreholes must be established based on the information derived from such survey.

It follows from the above that, for projects involving slope stability analysis in residual soils, a Geological Engineer should participate in the team-work, since, unlike other types of less complex civil projects, Geology plays a very important role in these cases. This comment could be obvious, but it is considered pertinent because, in many occasions, the implications associated with slope stability analyses in residual materials are underestimated, and they are developed by professionals who do not have all the preparation to face them.

As mentioned above, residual soils are, for a large part of the year, under partially saturated conditions. Accordingly, it would be logical to think that the principles of Unsaturated Soil Mechanics should be applied to any analysis involving this type of material. And, indeed, this is the case.

However, in practice there is a disadvantage: the available laboratories in the vast majority of geotechnical companies (which we could call "commercial", as opposed to the laboratories of some universities where research work is carried out), do not have the instruments to measure suction in soil or rock samples.

This is because traditional Soil Mechanics (the one commonly used in routine analysis) is "saturated Soil Mechanics", since in many of the tests, water is added to the sample. It is even common to saturate the sample to perform shear strength tests, since the saturated case is the most unfavorable, in which the worst strength and deformation parameters will be obtained.

Accordingly, for routinary projects, it is recommended that stability analyses be performed considering saturated conditions and the highest possible height of the water level on the slope (i.e., the water level reaches the surface). Since this case includes the most unfavorable conditions for the slope, the analysis will allow estimating the lowest and most conservative factor of safety (FS). Thus, if in these analyses a FS greater than or equal to 1.5 is obtained, it can be expected that the analyzed slope will remain stable, even under the worst rainfall conditions.

The strength parameters to be used in these analyses can be estimated by performing unconsolidated undrained triaxial tests (TX UU) under saturated conditions. Alternatively, the direct shear test (DST), which is cheaper and faster than the TX UU, can also be used as an alternative.

Samples for these tests are obtained from boreholes, which, as mentioned above, must be made with diameter NX or larger. It is also possible, although less usual, to extract samples from calicatas, or samples directly carved in the slope.

On the other hand, it is worth mentioning that correlations based on information obtained from slopes in geological formations similar to those of the site under study, can be used to make preliminary estimates. Figure 2, developed by Schnaid (2005, 2009) is a good example of such correlations. 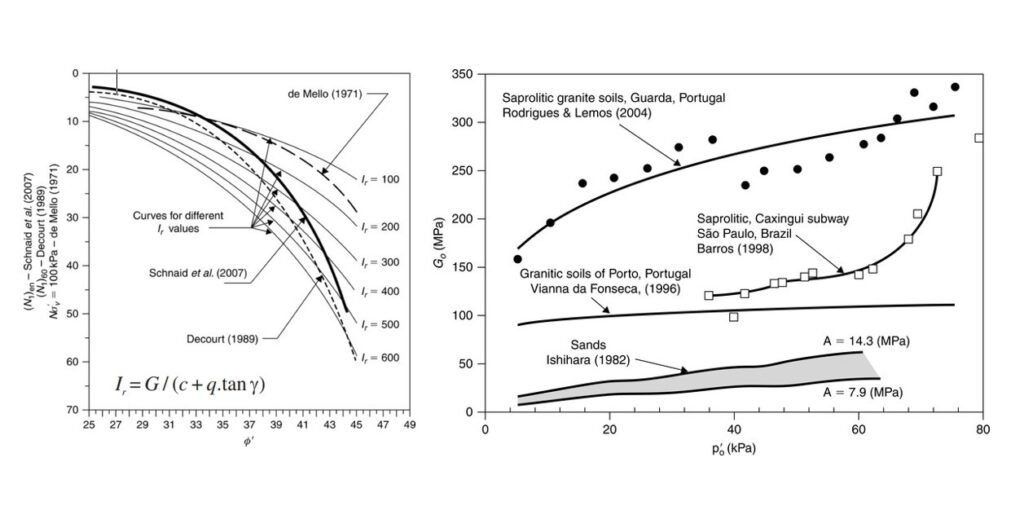 Of course, as in any engineering project, everything will depend on the cost-information balance. If the importance of the project warrants it, and the performance of analyses taking into account partially saturated conditions could mean significant savings in stabilization, for instance, these analyses should be performed in laboratories specially equipped for this purpose.

In any case, the geotechnical specialist will recommend what is suitable for the project being undertaken. However, as mentioned above, given the typical limitations of the laboratory available equipment for routine geotechnical studies, the determination of saturated parameters with the highest water level, is the most usual case in practice.