The passive condition is the opposite of the active one. In this case, if a rotational or translational deformation occurs around the base of the wall, but in the direction towards the backfill, the stress state of the soil at the back of the wall changes, generating the passive condition KP. Do you want to know more? Continue reading this post...

As we have already seen in previous posts, the displacements occurring in a wall influence the in situ stress state of the soil around the wall. During the installation of the wall, and as translational and/or rotational movements are generated at its base, the earth pressures change from the original Ko condition to active and passive stress states, depending on the relaxation behind or compression in the lower front zone of the wall, respectively.

The amount of horizontal movement that the wall must experience at its top for the passive state to be reached, depends on the type of soil and the height of the structure (H), as shown in Table 1

According to the table above, considerably more movement of the wall is required to achieve the passive condition than to achieve the active condition. However, movements well below those reported in Table 1 can generate significant changes in lateral earth pressure.

An interesting quote on this point was made by Terzaghi (1934) on the basis of certain experiments he carried out with walls, opportunely mentioned by Coduto (2001):

In general, it has been observed that in most soils, the effect of movement is not so dramatic, but it is necessary to consider that only exceptionally stiff structures will be subjected to Ko repose state conditions. Conventional walls will either be subjected to an active condition KA or a passive condition KP.

Estimation of the KP coefficient

How to estimate the KP coefficient, necessary to analyze the state of stresses at the back of a wall deformed towards the backfill? As we have already analyzed above, the estimation of this parameter is carried out in terms of effective stresses (although it is possible to estimate it on the basis of total stresses). This approach applies for all soils, and for any time in the life cycle of the structure, but implies that the approximate distribution of pore pressures must be known in order to estimate the effective stresses (Powrie, 2012).

Figure 1 shows the Mohr circle for effective stresses, including the failure envelope.

Assuming vertical and horizontal directions for the principal stresses, for a state of passive condition to be reached, the vertical stress must remain constant, while an increase in the horizontal stress is produced in response to the deformations induced by the wall on the ground.

Thus, it is satisfied that the maximum horizontal stress is given by:

The term KP is the passive horizontal pressure coefficient, which is determined from the following expression:

As can be seen, this coefficient is expressed as a function of the effective angle of internal friction of the soil.

One of the important aspects to highlight, is that the real walls are not free of friction, so the existence of shear forces in their back or front part would invalidate the assumption that the directions of the principal forces are vertical and horizontal, as we saw in the previous section.

For this reason, modern design codes (e.g. EUROCODE 7) consider the influence of wall-earth friction by means of the angle δ. Figure 2 shows schematically the typical design conditions of a retaining wall under a passive state, as established in the current design codes. 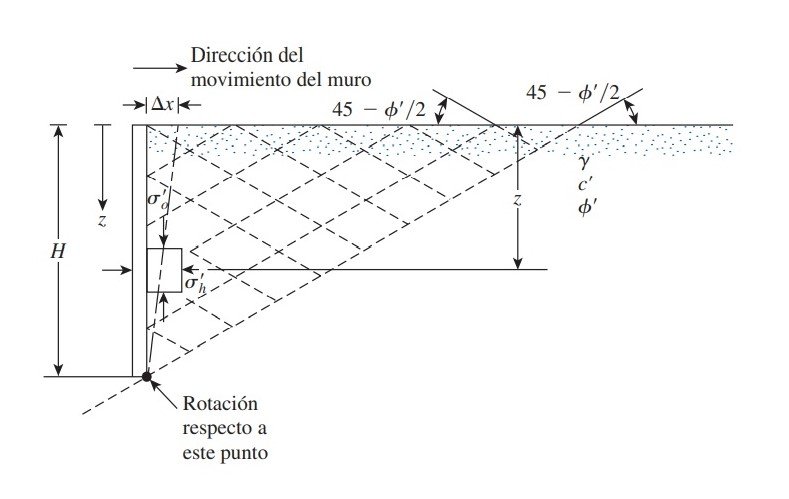 It should be noted that the aforementioned codes require the design to be carried out considering the ultimate limit state (ULS), which implies the reduction of the actual soil resistance, either through a factor of safety or through a resistance mobilization factor (Powrie, 2012).

Another aspect to consider is the fact that the theories usually used to analyze earth thrust, consider that failure surfaces are plane, when in fact they are curved. This circumstance is particularly important for the case of passive state, since an unsafe condition of the wall could be generated.

Shields & Tonulay (1973, CB Das, 2012) analyzed the influence of the shape of the failure surface on passive thrust, and proposed corrected KP coefficients for use in routine projects, based on the effective internal friction angle φ' and the wall-earth friction angle δ'. These coefficients are presented in Figure 3. 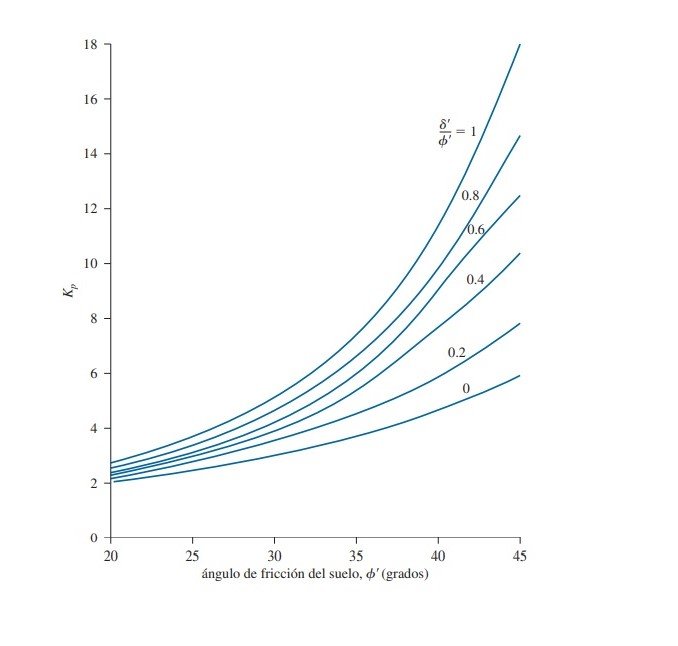 With the information I brought you today, we have completed the review of some basic notions of the states at rest, active and passive conditions. In a next post, we will deal with the influence of water on the stability of a retaining wall, a fundamental factor that must be considered in the design.